The perils of writing about white supremacy

“I have to deactivate this page,” I tell my partner, “I can’t take this anymore.”

And I do plan to deactivate the page soon, after I retrieve any thing that I’ve posted in the last five years that I want to keep. The page has to go because I’m tired of being threatened. I’m tired of all the racist garbage that people want to post to on my page. I’m tired of what happens when you study and write about white supremacists. I’m just tired.

And yet, I assumed a racist meme would be the end of it. I was wrong. 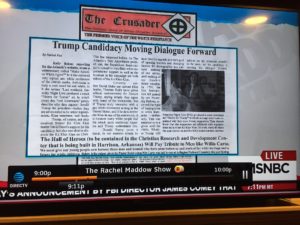 a friend texted me this image from a segment on The Rachel Maddow Show about the Klan in 2016. The article on the screen, “Trump Candidacy Moving Dialogue Forward” is from the Klan newspaper, The Crusader. The first two words of the article are my name.

The author took issue with my article from The Atlantic, “Make America White Again?” The author writes about me, “she mirrored the very typical anti white sentiments of the Jewish media. Anti racist is truly a code word for anti white.” I’m not Jewish, and I’m a freelance writer and scholar of the Klan, not part of some large media conspiracy.

When I first looked at the image, I couldn’t decipher what was going on. People send me images of Klan ephemera all the time; it’s one of the hazards of studying the Klan. And then, I slowly realized that my name appeared in Klan newspaper from today. My. Name. My name in current white supremacist media. I research Klan newspapers; I’m not supposed to appear in them. I wasn’t sure how I was supposed to feel. I tried to find humor in the situation, but I couldn’t. I tweeted about it to show I wasn’t bothered. I told concerned folks that I was fine. “I’m fine,” I said to them as much as I was saying it to myself. But, I wasn’t fine. Instead, I felt nervous and afraid. A contemporary Klansman read my article and printed my name in The Crusader.

Fine had seriously passed me by. Anxiety gripped me and wouldn’t let go. I tamped it down as best as I could. I would be brave, even if I didn’t want to be. This was no different than the garbage I routinely deal with as a woman who writes on the internet. I would be fine, I chanted over and over. But still I wasn’t.

Worry is a malaise that’s settled on me and won’t go away. I check email, Twitter, and Facebook with grim determination. Always waiting for the next terrible thing someone will say to me. On Tuesday, I learned that terrible appears in unexpected places like Amazon reviews that attack me as a person with no reference to my work. I feel like I’m always on the lookout for terrible, and I’m tired.

Maybe this type of writing is just not worth it. Maybe I should give writing about the Klan altogether. But, I can’t imagine abandoning this work either. Writing about white supremacy and racism feels like work that’s too important to give up. I have support and encouragement from so many lovely people that helps me keep writing. I try to remember all of the lovely people when I have nasty emails (or Amazon reviews)  from the not-very-nice people. It is getting harder and harder to remember only the lovely people, which is sad and unacceptable. I expect terrible, and terrible is so easy to find.

But, this current round of unpleasantness has taken a toll, and it’s not even as bad as the harassment other writers face. (I know that, in the same way that I know that there’s always another round of terrible up ahead.) The constant worry and low level harassment affect me. I’m having trouble sleeping. My temper is short. I’m cranky. The people I love most are suffering through my terrible mood because of strangers. Strangers who want me to feel like shit. Strangers who threaten, demean, and abuse. Strangers who just want me to shut up already. Strangers who make me want to stop writing about these topics because I’m so weary of dealing with them.

I’ll return when I feel ready. That’s not today.

Update: I shut down my Gospel According to the Klan page on November 12th after someone posted a comment begging for the Klan to come after Black Lives Matters activists. I refused to let a page that I managed for five years become a place where people could spew hate, so I deactivated the page.

1 thought on “The perils of writing about white supremacy”