Throwback Friday: “I have tried to recover a sense of humanity…”

Today, I introduce a new feature for this poor inactive blog (a valiant attempt to make it active) entitled “Throwback Friday.” And yes, I know everyone else does this on Thursday, but I’m a non-conformist. My goal is to repost previous posts from a variety of different blogs as method to archive my work at this particular blog, but also reintroduce things that I have previously written. This is especially necessary because I am terrible at cross-posting for reasons I don’t entirely understand. I will be posting new content. I promise. Cross my heart.  Hope to die. You get the point. This post on Jonestown and “evil” religion first appeared at Religion in American History on May 7, 2013.

“I have tried to recover a sense of humanity…”

Last week, I wrote a post for The Christian Century‘s Then and Now, curated by Edward J. Blum, on the label “evil” religion. As some might suspect, this label is often applied to the movements and people that I study (the Ku Klux Klan, doomsday cults, and new religious movements) among many other groups. The label, to put it mildly, is a problem, and the post catalogs my unease with quick judgments about the nature of “evil” religious movements versus other “good” religious movements (those that make us comfortable rather than uneasy). I wrote:

When people label religion “evil,” they almost always include Jonestown, Aum Shinrikyo and the Branch Davidians (who are represented here in an image accompanying Blake’s article). The common assumption follows that these religious groups can be marked as evil because they are imbricated in violence, death and destruction. We can cluck our tongues sympathetically at the supposedly brainwashed people deluded into joining these movements, and we can rest easier at night by assuming that our religious commitments must be the safe kind.

Moreover, we can hold onto the vision of “healthy religion” that [John] Blake espouses. If only we were versed in these four signs, the argument goes, then maybe these tragedies wouldn’t happen.

If only it were this easy. Such an understanding of “evil” religion is predicated on a sense that religion is inherently “good.” Blake even writes that “religion is supposed to be a force of good,” as if claiming this aloud necessarily makes it so.

Unsurprisingly, I am increasingly wary of labels like “good,” “healthy,” “authentic,” “bad,” “evil,” or “illegitimate” when they function as modifiers for religion. The normative bounds of how we wish the world is/was present themselves in such labels. Yet, what does that do for analysis? I have spent much of my career thinking about how assumptions about religion and religious people guide our narratives. Villainy, as I tell my students, might make a good story, but it does not provide analysis. To claim the “evilness” of some religions marks others as safe and good, and in both instances, it ignores the sheer ambiguity and ambivalence of that thing we call religion. We lose something with every normative claim.

More and more, I find myself returning to David Chidester’s Salvation and Suicide: Jim Jones, the Peoples Temple, and Jonestown to think through his claim of religion as “being a human person in a human place” (xviii), even if that means engaging and analyzing revolutionary suicide and mass death. This book prompts us to think about how to make the incomprehensible (the mass suicide of 913 members of the Peoples Temple) into something comprehensible. How do we make sense of these tragic events? Can we avoid the urge to moralize, to label “good” and “evil,’ or to rely on easy narratives of villainy, destruction, and madness? Can we approach instances of violence and terror with empathy? How do we humanize victims and perpetrators? Or can we? (Or do we want to?)

Chidester writes, “I have tried to recover a sense of humanity of the people who died in Jonestown” (xvii-xviii). Rather than provide another caricature of Jim Jones or Jonestown, Salvation and Suicide provides a more complicated portrait of the lives and deaths of 913 people in the Guyana jungle. No easy labeling of “evil” or “good” appear in its pages. Instead, we are left with haunting images of corpses littering the ground without easy explanations as to why. His book, then, works against dehumanization of the Jonestown dead in media coverage, scholarship, and public perception. To do this, he relies upon Ninian Smart’s concept of “structured empathy,” which is empathy structured by categories like symbol, myth, classification, orientation, and ritual that allows engagement with the worldview of another (xiv). I find this concept compelling as I employed it in my work on the Klan, but it is also unsettling. What might it mean to engage Jonestown or the Klan empathetically? What do we gain by emphasizing the humanity of our historical actors? What kind of scholars are we if we ignore their humanity? This question, in particular, appears and reappears in every research project of mine. I can’t escape it, nor do I want to.

What this means is that Salvation and Suicide lingers with me. Maybe, it even haunts me. The book forces me to think carefully about the methods I use to study religious people. It warns me to be careful and considerate. It presents the perils of dehumanization. It gives me pause. It keeps me awake at night. It gives me hope about scholarship. Chidester writes:

Perhaps I have taken the method of “structured empathy” to the breaking point here. However, if I had to push this brief observation on method a step further, I would argue that the method of structured empathy is already a moral strategy. It requires the recognition of the irreducible humanity of others upon which any ethics of the interpretation of otherness must be based (xv). 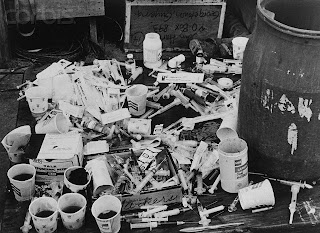 To recognize the “irreducible humanity of others,” on the surface, appears not to be a radical claim, but it is. Chidester’s careful reconstruction of the worldview of Peoples Temple represents the allure and appeal of a utopian commune in Guyana, in which members could escape the dehumanizing forces of American life, capitalism and racism, and remake themselves. Chidester demonstrates how suicide became a choice of being human or becoming subhuman. In the end, the Jonestown dead emerge as both. In heartbreaking detail, he guides us through the last moments that result in mass suicide, a choice of humanity, and the resulting interpretations of the event that make the Peoples Temple subhuman again. Finding humanity is not always an uplifting journey or a tale of liberation. Sometimes, finding humanity means confronting violence, terror, and death. We can be left haunted rather than inspired.