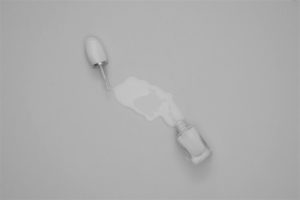 But, what I didn’t think through was the reaction that people around us would have when we returned to our regular schedule.

I like his preschool, and I like his teachers. They are generally supportive of the choices both of my kids make about hair and clothes. Not long ago, my son wanted a ponytail like his sister, so I gathered his longish bangs into a tiny ponytail on top of his head. It looked a bit like a horn, and he decided he was a unicorn. His teachers treated my little unicorn remarkably well. Some of them confessed how sad they were when he decided to no longer be a unicorn. (I was too.)

“I want them to stop asking,” he noted.

“Can you tell them nicely to stop asking?”

He and I practiced what he might say when someone else asked about his nails, and he seemed happy with the responses we created together. Frustration no longer contorted his features. He complained; I listened and advised. He returned to his movie.

Of course, his frustration transferred to me. Why the hell would anyone care about a three-year-old’s painted fingernails?

But, I knew why. Because he identifies as a boy, and the common gendered expectations for boy don’t allow for painted nails or anything else coded as “girl.” And finger nail polish remains associated with girls. My kiddo had his first memorable brush with gender policing. He made a choice that didn’t fit neatly with expectations of what a boy should look like, and he spent the day fielding questions about his choices by both children and grown-ups. I was both angry and sad, but not surprised.

After all, I taught courses on gender to college students for almost nine years. In my own work, I write about norms of masculinity and femininity. I’ve analyzed the cultural expectations that hold women back in our culture. I know the limits our culture places on people because of gender. I’ve suffered through them: sometimes, I’ve refused to conform. It hurts even more to watch my kids bump up against gendered limits. To watch them chafe at what our culture wants them instead of figuring out who they are.

And yet, I was disappointed that my kid couldn’t be who he wanted to be, or who he is, because of cultural expectations of gender. I want him to be the person he wants to be. I want him to make choices about his body and his identity that he wants to make. I want him to feel free to figure who he is and know that he can change his mind about who he is too. But, our culture limits him to what boys are imagined to be. Masculinity, in particular, is a limited and limiting idea. There’s a very narrow ideal that boys and men are supposed to meet, especially in the South, and there are folks around us who are gleeful to enforce that ideal. and shame anyone who doesn’t match it. I hoped we could avoid toxic masculinity for a little while longer, but that was a pipe dream. I chose to support my kid and his choices rather than someone else’s idea of what boys should be. Forget that noise. Their opinions don’t matter, and I wanted him to know that. His body, his damn choice, not theirs.

Yesterday, when I picked him up from preschool, I asked about his day. He told me about the warnings he had at nap time and having to leave the playground because of rain. And then, he noted quietly, “My friend told me I was a girl because of my nails.”

I took a deep, calming breath. I didn’t yell about how stupid that sentiment was. Instead, I managed to say, “That’s silly. Painted nails don’t make you a girl or a boy.”

“Well, what did you say to your friend?”

“I said, Please don’t talk to me about my nails.”

This essay was originally posted as a TinyLetter in July of 2017. Someone reminded me of it today, so I thought I would print it again here. You can get original essays of mine directly to your inbox by signing up here to receive my TinyLetter, Cold Takes, each month. I’ll usually send you a letter/essay, a list of what I’m reading, and a list of what I’ve written lately.