So, I convinced Chris to watch Nanette , which is Australian comedian Hannah Gadsby’s Netflix special. (Here’s the trailer.) I had heard from a number of women that it was remarkable, and I assumed that they meant remarkably funny. And I was reminded of the show when this image popped up in my Facebook feed: 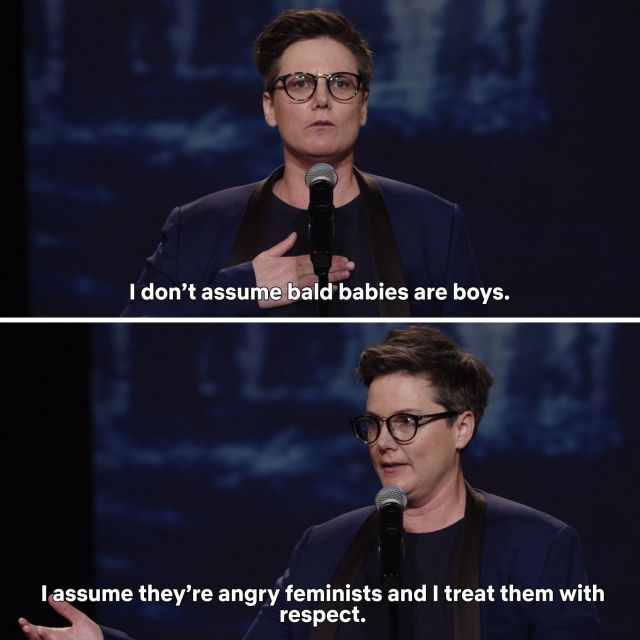 Seriously, this is my kind of humor, and now, I will never look at a beautiful bald baby without assuming they are a feminist. What a lovely gift from Gadsby to me (and everyone really).

And Nanette is funny, but it is also so much more.

Before I go on, please note that the rest of this post will have SPOILERS for the show, so abandon ship now if you don’t want to be spoiled.

I’ll even give you until the count of three to ignore this post and pretend that you never actually received it.

Okay, so that’s way more of a warning than I give my kids.

So, Nanette is remarkably funny, rife with jokes about sexual identity, the difficulty of coming out in a small town in Tasmania, feminism, the privilege of straight white men, trauma, and also art history. But, Gadsby shifts gears on the viewer in the second half and you can kind of, sort of, tell what’s about to happen. There were glimmers and glimpses. And yet, I wasn’t entirely prepared and neither was Chris. We hadn’t expected her meta-discussion of what comedy can and can’t do. Or her devastating critique of comedy as a genre that focuses on beginning and middle but never really lets us see how a story ends. Or that instead of laughing our way to the end that we would actually be shocked and crying by the time Gadsby walked off stage.

I finished Nanette, and all I could think was: Holy shit, I was not prepared.

I tried to escape into a paranormal romance novel to no avail; he picked up Rebecca Roanhorse’s Trail of Lightning (an excellent book that also deals with personal and historical trauma and what it means to survive).

What I found is that I keep thinking about a particular line from Gadsby. Near the end, she says, “To break and not yield is strength.”

When I heard her say this, those words resonated in my head, To break and not yield is strength. There’s truth in her words that I’m still grappling with, even as I want to embody what she’s saying. I kind of want to have her words tattooed on my forearm as a reminder to myself that we can break but we can also not yield. Something I can glance at as I make my way through a world that encourages men to break and annihilate women just because they can. Just because women appear as objects not people. Just because we still have to fight for our humanity.

To break and not yield is strength, I think and remember a conversation with a friend last week. He told me  that I have managed to write about mental illness and trauma in a way that refuses to center on brokenness, my brokenness in particular. Somehow, I keep telling stories about my experiences that avoid the pervasive narrative of brokenness as a story all of its own. Even when I write about how people attempted again and again to break me or tell a story about my broken brain, I don’t appear broken; that’s not the center of my story. And I wondered how I managed to do this.

His insight astonished me because I used to think that I was broken beyond repair. I spent years believing that I was an irreparable, deeply flawed person. My biological father and his mother, my grandmother, needed me to feel that way, so I did. Until I didn’t. It’s no coincidence that I feel more and more compelled to write about my early life and shape my story from one of supposed brokenness to survival.

Gadsby gave me a new way to think; she gave me words that I didn’t know I needed. Breaking but not yielding is strength, and moreover, it is a hugely powerful way to interpret those stories that we tell ourselves over and over about the things and people who break us and all the damage we manage to survive.

Admitting how we break and how other people have broken us is not weakness. Rather, we show that their attempts to hurt us—to annihilate who we are—aren’t the end of our stories; they might be the beginning or the middle, but they aren’t the end. We get to decide where our story begins and ends. We might break, but we are also unyielding. We get to find and understand our strength. We get to tell our story, not them. Never them. We can’t control what breaks us, but we are narrators of our own lives, not those who harmed us.

Gadsby’s Nanette made me stop and consider the place of trauma in my stories and the stories of other women that I can’t help but read. In Bad Feminist, Roxane Gay wrote how she loved stories about girls who survive some shit, and I do too. There’s potential and power in survival and stories of survival. We, they, survived other people trying to break us, them, beyond repair. We are always reparable, if it doesn’t seem so at the time. Stories of survival show us the way.

But, what really struck me about Nanette is how a supposed comedy show gave me clarity about my reticence to detail all of my trauma in essays. How I don’t want to catalog for readers all the ways I’ve been broken because I would rather focus on survival. How I would rather write about learning not to yield. How I would rather document what it is like to repair myself, all those jagged edges, and how those repairs made me who I am today. Maybe, my story of survival helps too.

My trauma isn’t up for an any audience’s consumption. The horrors I’ve faced aren’t yours; they are mine. I decide what to share. I decide whether I can make suffering into art. I decide whether writing about what broke me is useful to me or whether it will do more damage than good.

Writing about trauma, and also mental illness, is my method to shape my own story. I attempt to make sense of what happened and what I continue to struggle with today. Some editors of some publications urged me to appear more broken and less reparable. More trauma and less survival is supposedly what I need to be publishable. And now, Gadsby gave me the language to respond to them: I broke, but I also didn’t yield, and that is strength. Show my strength alongside my wounds, not just my wounds and scars.

Not yielding is, perhaps, the crux of my story and maybe yours too. It’s where our strength lies.

Thank you, Hannah Gadsby, for helping me, us, realize that.

This post was originally a TinyLetter from August 15, 2018, the day I turned 38, for real this time. If you want to subscribe to my TinyLetter, Cold Takes, you can right here.