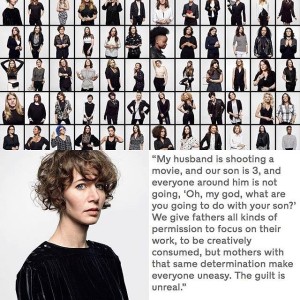 I keep looking at this quote from Miranda July on motherhood and creativity. It has made the rounds on Facebook and Twitter, and I shared it too. I read this quote 10 days after reading your most recent letter, and I cried in my office while the dogs stared at me and the cat chose to ignore me.

July describes how our culture grants men the freedom to pursue their work, their careers, and their creative projects without much discussion of family obligations. “We give fathers all kinds of permission to focus on their work, to be creatively consumed,” she writes. Mothers, unsurprisingly, are not granted the same privilege. When mothers are creatively consumed, we face cultural pressures about what mothers should and should not do. (Often, these are pressures we’ve internalized and assume are the way things are.)

Creative work, like many other forms of work, comes with a host of gendered expectations, which I’m still learning to navigate.

In October, I did a series of public lectures that kept me away from home for six days. At the end of my last trip, I was riding in a cab on the way to Fargo airport and making small talk with the driver. He was telling me about the money he was saving by living in the nearby Moorhead, MN, where I just lectured. He asked if I traveled much for work, and I admitted that I didn’t. I let it slip that I had two children. He took his eyes off of the road to stare at me and asked increduously, “Who is watching your children?” I explained that their other parent had the situation under control, but he looked skeptical. I kept the conversation going until I arrived at the airport, but I was unnerved by his question. All of a sudden, I felt remarkably guilty about my trip. My kids were at home while I was off on my own. I was living my life without them. My mood soured. I was annoyed at my reaction to his question, but also his assumption that mothers were the sole caretakers of children. The mommy guilt appeared and remained with me. My trip was no longer as enjoyable as it had been. I ate Skittles for lunch in protest.

For mothers who want to pursue creative work (and any other work), July notes, “The guilt is unreal.”

The guilt associated with my own attempts to chase after my writerly goals is staggering.

This guilt burrows under my skin. I can’t seem to rid of myself of it. I become convinced that I’m a failure at motherhood because I care about so many other things (essays, book projects, writing) alongside my children. I worry that my writing is somehow in competition with mothering. I wonder how I can do both without going bananas.

When I told my seven-year old that I applied for an MFA program, she burst into tears. I was shocked by her reaction because this kid is a serious supporter of my writing. I calmed her down and realized that she didn’t want life to change dramatically. She likes having me around now, and going back to school appeared to be a game changer. “I’ll always be your mommy,” I explained, “even if I’m admitted.” She was incredulous, but moved on.

My worry, then, is not entirely misplaced. Motherhood occupies my mind. No, that’s not quite right. Motherhood colonized large swaths of my brain and claimed spaces that could be used for creative projects for my children’s day-to-day needs, wants, hopes, and desires.

I maintain a running list of the food that they eat or don’t; the names of their teachers, friends, stuffed animals, and favorite movies, books, and toys; their personality quirks and the jokes that make them laugh; an expanding guide of how to manage a toddler’s emotions and the ability to stay sane while he screams and flails over a perceived slight; the tricks to help both of them process emotions; constant evaluations of whether they have been fed, clothed, and prepared for the day and night; attention to which days have homework and whether the dance bag has every damn pair of shoe my seven-year old needs. This week, am I responsible for the class’s afternoon snack? Did the oldest read for 15 minutes every day for homework? I look at my children for signs of their physical and emotional states. Are you frowning? Why are you frowning? Do you need a diaper change? Not now, likely soon. Have you brushed your teeth? Why can’t we ever find your shoes? They were under the couch. How did they get there? What do you need? Does it require my help? When, oh God, when is bed time?

When I’m writing an essay, I try to set all of these lists and concerns aside to focus on the work. I attempt to flow. But, my work still feels fractured. I work and worry. I worry and still work. On some days, I even romanticize work before children, but that’s an assured path to making myself frustrated, angry, and desolate. How will I ever get work done?, I snarl. Grumpiness takes hold.

At a particularly low moment last week, I agonized over the writing sample for my MFA application, and I decided that I needed to go into hiding, preferably in a deep, dark cave, where no one could find me. It would be me, the bats, and pilfered wifi. Wouldn’t it be glorious? (Not really.) I became convinced that I could only finish my essay by sequestering myself. My creative work must be separated from motherhood, right? I yearned for clear distinctions and firm schedules. A space that was mine alone to be a writer without motherhood on my mind. To be just a writer. To hunker down in my essay and not interact with anyone until I was finished. What would my creative life be like with no obligations? To be unfettered and free? What might I actually get done?

Instead of hiding or hunkering, I drove the kids to preschool and school (it was my morning). I sipped my coffee, put Kacey Musgrave’s albums on shuffle, and got to work on my essay. What I realized is that I still manage to do my creative work while mothering. I’ve created the time to write, even though I feel the tension between the two viscerally. I still manage to get work done.

More than that, motherhood makes me ask different questions and pursue different projects than I did before my children. Being a mother, being a parent, makes me a better writer and person. My work would not be what it is without the influence of these tiny humans on my life and my words. And yet, I wish the days that I feel torn between writing and mothering were fewer. Maybe, I need to learn to live with the tension and understand it as generative. Maybe, I need to reimagine what it means to be a mother in a way that helps rather than hinders me. I’m mother who writes and a writer who mothers. Maybe, that’s enough.

The other letters between Liana Silva (@lianamsilva)  and me about personal essays, creativity, and motherhood are here, here, and here.