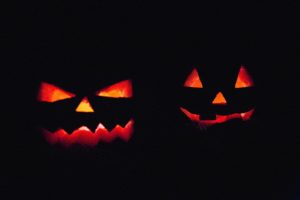 There are only two days until my favorite holiday of the year, Halloween. None of you should be surprised that Halloween is my favorite. I’ve loved it since I was first able to make my own decisions about the costumes I would wear, and I continue to love it as I help my two kids pick out their own costumes, a neon skeleton with a tutu and a Power Ranger for this year. (I might have bought a Wonder Woman t-shirt with a cape attached and a felt headband for myself.) I have decorations, skeletons and a giant spider web for our house. I stock up on spooky Halloween decor because I might put some of it up in my house year round. As my youngest kid notes, “Mommy likes creepy things.” He’s not wrong.

Part of the reason that I have loved Halloween is that I have loved horror too. Ghosts, goblins, werewolves, vampires, zombies, and all manner of things that go bump in the night were my favorites. I was reading ghost stories as soon as I could read chapter books. I was reading Stephen King in middle school.  I read Shirley Jackson’s The Lottery (1948) in high school and loved it, while my fellow classmates were unnerved. I have watched The Lost Boys (1987) more than I am willing to admit.

There’s something comforting and familiar horror stories because horror is easy to understand. The rules are always clear, and there’s the gruesome reminder that it is so, so easy  for human bodies and minds to break. When I need to escape from the world we share, I often turn to horror movies, shows, and novels. More now than ever before, which I don’t want to think about too carefully. Over the years, I’ve continued to love horror, even as I wasn’t quite sure that it loved me back.

Not only have I loved horror, I’ve written about it too, as both a religious studies scholar and a personal essayist. I keep coming back to horror. It keeps coming back to me.

This year, I wasn’t able to write anything Halloweenish in October. Too many things got in the way, including hurricane Michael, and I’ve found it hard to write even about things that I usually enjoy writing about.

Instead, I’ve pulled together some of my essays on horror, monsters, and Halloween, for you dear reader, in one single post. I hope they aren’t too scary for you. Maybe, you’ll want to read them with the lights on. Maybe, not.

Hell House tortures women’s bodies to send messages about morality, chastity, and the peril of sexuality. The bodies of the lost are feminine in shape. A girl, who is date-raped at a rave, later commits suicide while being slut-shamed by a death monitor. An abortion gone wrong kills another young woman, but not before we hear her ear-splitting screams and see her anguish, physical pain, and so much blood….Before these female characters die, men insult, threaten, choke, slap, push, and rape them. These young women die by their own hands or the hands of another, death monitors drag them to hell. An angel spares the abortion girl, who cries out to God to be saved. She finds salvation, but loses her life. Women’s bodies appear broken and wounded. They are clearly victims.

The South has always seemed seriously spooky to me. The rural cemeteries lining long stretches of road with faded plastic flowers and cement angels. The abandoned houses that almost proudly show their wear and dare you to enter. The trees and bridges that once held the ropes hung around the necks black men by white men while white crowds watched on….The stories passed down to me from my grandparents about all the people who died from their own mistakes, natural disasters, or the more mundane things that we imagine won’t kill us. One small mistake, they seemed to note, and your life could be over. We’re always just a foot away from the grave. We’re always one small step from salvation or damnation.

I have a hard time watching The Walking Dead. I hate to admit this as a scholar of zombies, but I will anyway. The show is hugely popular with viewing audiences, and fans of zombies, who first proved skeptical of this melodrama with monsters, have come around. On Sunday evenings in the fall and spring, viewers tune into AMC to see what will happen next. What new methods can be used to kill zombies? Which of our survivors will last throughout the season? What will they have to do to survive? Who will kill or be killed?

Welcome to the Dark Side

Satan and demons appear as serious problems that must be eliminated. The world around us emerges as antagonistic and full of peril. Safety is elusive and temporary. Demons target everyone, if we refuse to acknowledge their presence. Practitioners can see the signs that the end is near everywhere: for example, they issue warnings about people who listen to heavy metal, wear silver jewelry, and have piercings and tattoos. (My fashion aesthetic seems to signal the demonic. I never realized.)

There’s a moment in George Romero’s Night of the Living Dead (1968), in which I always try to convince myself that if I quit watching then everything will turn out okay.  If I don’t witness what’s to come, it won’t happen, right?…Every time, I watch Night I wish that the movie ended with Ben’s survival. I wish Ben would walk away into the new post-apocalyptic world, find his place, and live a long life. And then, the movie would fade to black. I wish for a hopeful ending rather than the tragic one that follows

Horror showed me how bodies could be unmade. How bodies were maimed, cut, shot, tortured, and killed. How a body’s hurts could be physical and visible. How blood splattered on the floors and walls was a sign that things had come undone. Horror showed me the consequences of violence, physical and psychic. It stood as a warning of how terribly wrong things can go.

My father loved horror movies and novels. His love of horror passed down to me, whether I wanted it or not. He’s the reason I first read Stephen King. He’s the reason I came to crave scary movies. He’s the reason I learned to love horror. And hell, he’s probably the reason I now analyze horror as a way to write and think about American culture. He’s responsible for my attachment to horror, even as I hate that he is.