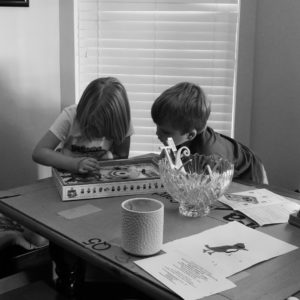 He gives me a fierce hug around my knees and runs off to play. I couldn’t help but smile as I jog through the preschool and out to my aging SUV. I love him with an amount of emotion that still frightens, but I also have to limited time to write. I love him; I need him to let me leave.

I was ready to write an essay on motherhood and ambition, but I still have to get the eight-year-old to her half-day theatre camp. She’s nestled in the backseat with her nose in a Bad Kitty book that she’s already read a dozen times. She barely notices when I hop in the driver’s seat. I spot her rolled-up script in the front seat and hand it to her. She grabs it without tearing her eyes away from the book.

“We’re going to be late,” I sigh and drum my fingers on the steering wheel. As I navigate out of our neighborhood, I punch the button to turn the radio to NPR and wonder what I might say about ambition and motherhood.

I used to be ambitious. At least, that’s what people routinely told me. Teachers, friends, bosses, advisers, and mentors all commented on my ambition. I knew what I kind of career I wanted, to be a professor, and I had a plan on how to accomplish that goal. I was relentless. I jumped through any hoop that I had to. I set up the goalposts just to knock them down. I learned to outwork the competition.

“She’s ambitious,” they said, and it wasn’t always a compliment.

My ambition only took me so far. After I finished my doctorate in religious studies and started applying for academic jobs in 2008, I discovered that search committees cared less about my ambition and credentials and more about my husband and infant daughter. Search committees assumed that marriage and motherhood made me a less serious and less competent candidate.

My ambition no longer registered; motherhood overshadowed it.

Employers imagined that motherhood and ambition didn’t fit neatly together. To be a mother was to not be ambitious. To be ambitious was to not be the devoted mother everyone expected me to be. I couldn’t convince them otherwise. After five years on the academic job market and with a second baby on the way, my ambition dissipated and left cynicism in its place. I gave up on striving and decided to take a break to focus on my family and the different life I wanted to build. Ambition lead to pipe dream that I had given up on, hadn’t I?

The cars on the road in front me are slowing down. NPR hosts yet another discussion on what President Trump had said in yet another interview, and my daughter chuckles under her breath at Bad Kitty’s antics. “No, no, no,” I mutter as I look at the sea of red brake lights in front of me. The traffic becomes even more congested. The road transforms into a parking lot. I watch the minutes tick by on the clock on my dashboard.

Cars inch forward slowly as I will them to hurry up. My mind wanders yet again to how I should open the essay that I should be writing instead of sitting in traffic. Figuring out how to open an essay is the one of the most important parts of essay writing for me. I can’t write an essay until I figure out that first sentence. “You are ambitious,” I say aloud, testing out the sounds of the words. Maybe that works, but probably not. I glance again at the clock and worry about how late we would be.

“What the frick is going on this morning?,” I groan. Looking away from her book, the eight-year-old pipes up, “Did you say something?”

“Nothing important. The traffic is bad. I think it might be a car accident.”

“Oh,” she responds with a bored tone and picks her book up again.

You are ambitious, I think.

Before now. Before today.

Ambitious was something I used to be. I had ambition. I was ambitious. All in the past tense.

Finally, the traffic starts to clear. Finally, I can drive at a normal speed. Finally, I can drop this kid off, so I can work on the essay that I can’t stop thinking about. Finally, I can ponder what happened to the ambition that used to define me, but now seems lost. I turn into the driveway of the Young Actor’s Theatre and park. A gangly teenage boy opens the car door, and my daughter hops out with a quick wave. I take a deep breath and drive to a nearby coffee shop, where I write for four hours and then return to pick her up. My schedule revolves around hers this week. Half days instead of full days. Theatre camp because she loves it and because I love her.

But, it is not just this week, is it? My schedule works around theirs every week. This is mostly my choice. I have an editing job and a patchwork of writing gigs that I fit into each day usually between 8am and 3pm, so I can spend time with my kids.

As I plunk down at my favorite table by the big windows of the coffee shop, I realize that I don’t feel ambitious. What does ambition even feel like? I’m not sure I know anymore. I know how I feel right now as I take my first sip of coffee. I feel tired and worn down. I feel like there’s not enough coffee in the world to convince me to write today. I look at the clock on my laptop and wonder how much of my precious writing time I’ve already wasted with worry.

Just getting two kids to preschool and camp today feels like an accomplishment. When did doing what I must start to feel like an accomplishment? I’m afraid to answer that question. Is that what my ambition looks like today? Wrangling children to and from home every day? Writing even when I don’t feel like it? Editing a magazine because I need a job that pays me on-time every month? Is ambitious something I even try to be anymore?

Do I have ambition? Or just the sheer determination to do something alongside mothering?