On (More) Monsters: Figurative and Real

To get into my newest project, a cultural history of zombies in America, I’ve been reading about monsters, monster theory, horror, zombies in all shapes, sizes, and phenotypes, and fear. This is an entirely new endeavor for me, and I had forgotten the exhilaration and exhaustion that define learning (and then writing) on a new topic of inquiry. All the while I have been crafting promotional materials for Gospel According to the Klan,  and my mind has been invaded by monsters and monstrosity. I finished reading Asma’s On Monsters (mentioned in yesterday’s post), which is really a cultural history of monsters and what becomes monstrous from Alexander the Great to the medieval period to the twenty and twenty-first centuries.

Asma is a professor of philosophy, and his book works best when he is parsing out the relationship between Kant’s sublime, Freud’s uncanny, and the dictates of modern horror films, including the much-panned turn to “torture porn” (think Saw and its many, many sequels). He also seeks to place monsters in the realm of biological reaction, cognitive psychology, and Darwinian evolution, which I find less compelling because of his attachments to science-as-reduction at the cost of the contextual. Monsters, he notes, again and again bear a familial resemblance, so that we can put our individual and collective fingers on what a monster is or is not (by virtue of this, what a human is or is not, too). The meanings and uses of monsters change as the times change. Alexander’s monsters are not quite the same as (in)famous serial killers, zombies, androids, or th 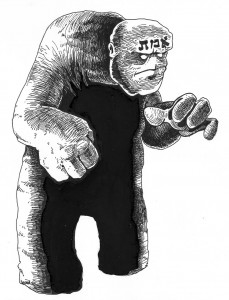 e things that lurk in murky waters but they are similar. Monsters become a reflection of anxiety of the period. To which, I say, sure, but what else can we say? For Asma, one of the significant features of his book was to showcase how societies, social groupings of people, and individuals need monsters. Monsters appear when boundaries are blurred. They also run rampant in our Freudian Ids as well as in our nations, communities, and homes. Monsters, if you will, are still with us.

Even in the post-modern (or is it post-post-modern) era, monsters remain in spite of the turn to relativity and the embrace of the monstrous in each of us. Asma’s meditation of monsters is about monsters, but he also wrestles with humanity, the humane, and the inhuman (read monster). Every discussion of historical and contemporary monsters enlivened a discussion of how the human is defined. Does the monster just work as a foil to humanity? (The better question is does the monster work as a foil to ideal visions of humanity?) Can inhumanity elide into monstrosity? If so, how and when? Where are the boundaries, the borders of the human? Can monsters be redeemed? In Asma’s insistence that we still have monsters no matter how the post-moderns relativize them, I see the strong desire to adjudicate who is human(e) and who is not. On Monsters begins with the author’s fear of murky waters juxtaposed with the reality of torture, so it was not entirely surprising that Asma wants to still be able to label the monstrous/the monster. Can’t we agree, he seems to say, that monsters still exist (and they torture, kill, and harm)? More important, that we know them when we see them. Monsters are always identifiable.

It was at this juncture that I wanted to nudge Asma in his attachment to the language of the monster, the morality of it, and the consequences of using this language to mark who is human and who is not. Dehumanization, he admits, is a part of the process of war and torture, but he still wants to claim the ability to dehumanize those who commit inhuman action. Edward Ingebretsen warns in his At Stake: Monsters and the Rhetoric of Fear in Public Culture (2001) that “no narrative is value-free, even, and especially, this one” (15). The narrative of the monster has agenda, complicity, and judgment. To Asma’s “can’t we agree?” is Ingebretsen’s “why do we have to?” Where Asma continually compares monstrosity and humanity without really positing how we define a term like human, Ingebretsen makes the relationship clear: monsters emerge as “failed humans” (2).  He continues: “By locating monsters off the social map, we locate the human–and, thus, we hope ourselves–on it. Shall we ourselves, pass the “Monster Test”? From day to day, the answer to that question is never clear, never certain. This, ultimately, is what is at stake” (5). Hope begets humanity, and fear surrounds the abjected. Monsters, then, become a method to present our own humanity back to ourselves. We *are* not monsters, but those (people) are. This, for Ingebretsen, is the slippery slope of the  monster, the identification, the label, the category.

For my own work on an unloved group, the language of the monster popped up in the most interesting of places, academic works describing the modern day hate (white supremacist) movement. In my early stages of research for the book that is now Gospel, I found that some of the scholarship followed a predictable pattern: meet supremacists, describe initial disgust/fear, socialize and uncover their humanity (shock!), write about nice conversations over coffee or sweet tea, then realize that actually these folks our inhumane/despicable/monstrous even, and finally emphasize that they aren’t ALL bad people, except for the ones who are. What struck me was not the attempts to humanize but rather the moment in which the narrative turned, for lack of a better term, creature-esque. Conversants’ bodies change, and they shifted from human to hateful creature (or monster). The supremacist rhetoric mapped onto their bodies, and they emerged as less human(e) in the telling. They became as monstrous as their words. Narratives are always already value-laden. Only monsters preach hate, the texts told me. Only monsters burn crosses and wear robes. Only monsters, only monsters, only monsters, echoed. My work, then, responds to that echo with: what if they aren’t monsters? What if the labeling of white supremacists as monsters allows one to ignore one’s own racism or the collective history of intolerance and racism in America. How do those boundaries, monster or human, impact not only public culture but our own individual strivings of self? How do monsters work for us?

We aren’t, you are becomes a dangerous supposition. Narratives are never innocent. Ingebretsen reminds, “Monster-talk might be cheap, but it is easy to use and takes toll on human lives” (9), in that he and Asma are in agreement. Yet Ingebretsen wants to push further to ponder: why we even make monsters in the first place? The answer to that question, like all good questions, is more questions, but the pursuit of monster-making has drug me asunder (which means prepare for more on monsters).

3 thoughts on “On (More) Monsters: Figurative and Real”