The Zombies Are Coming! The Realities of the Zombie Apocalypse in American Culture 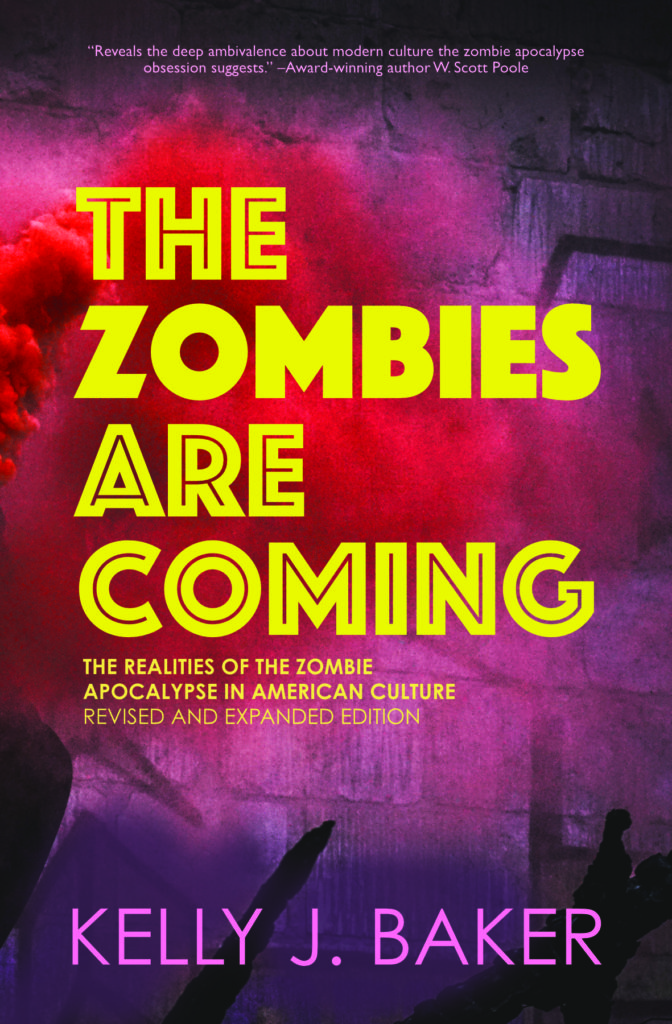 The Zombies Are Coming! The Realities of the Zombie Apocalypse in American Culture

Home » Writing » The Zombies Are Coming! The Realities of the Zombie Apocalypse in American Culture

The Zombies Are Coming! The Realities of the Zombie Apocalypse in American Culture (Revised and Expanded Edition), Blue Crow Books, 2020.

From Kelly J. Baker, author of the INDIE-award-winning Sexism Ed, comes an account of how the U.S. fascination with zombie apocalypses has shaped American culture—and our very humanity.

Look anywhere in America these days, and you’ll find the living dead: they’ve invaded TV shows, films, comics, novels, and video games. These monsters dominate pop culture in ways that titillate and terrify us, but to some people, zombies aren’t just fiction.

And zombies are just the beginning: America’s real obsession lies in the zombie apocalypse. Our culture loves to imagine the world at its end, and some Americans do more than imagine: they actually hope that the zombie apocalypse will occur—and they’re preparing for it. Just look at the rise of doomsday preppers, the ever-growing fascination with guns and personal arsenals, and the military’s use of zombies in training exercises. Today, the line between zombie fantasy and reality is more blurred than you might think. When what is supposed to be horror fiction can quickly become horror fact, the consequences are more destructive than our greatest imaginings.

How do we know the zombies are coming? Because they’re already here.

As only she can, Baker lures readers down pop culture’s dark alleyways, riddling out our inability to get over the end of the world or what comes after. This book is a jagged mirror held up to America’s violent fantasies, deepest fears, and addiction to apocalypses—forcing us to admit that the real monsters just might be the homicidal misogyny, bloodthirsty white supremacy, and rabid consumerism we made along the way.

A perfect guide through the unrelenting, decaying, hordes of our contemporary zombie apocalypse.

—Jason C. Bivins, author of Religion of Fear: The Politics of Horror in Conservative Evangelicalism

—W. Scott Poole, award-winning author of Monsters in America: Our Historical Obsession with the Hideous and the Haunting

Baker reminds us that apocalyptic fantasies have always been part of the popular American imagination.

—Kathryn Reklis, author of Theology and the Kinesthetic Imagination: Jonathan Edwards and the Making of Modernity