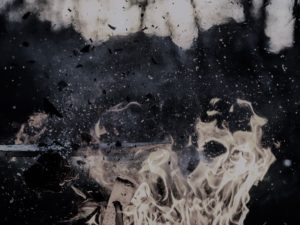 *Who would I be without my anger? I don’t know.*

My simmering anger has come to define me. It’s familiar, even if it’s not welcome. A steady hum vibrating my bones. Never quite gone because it’s a foundation of who I am.

What I can’t make myself say is that I’m not sure what I’ll do without anger. It’s a long time companion, this rage I have for my father. It used to smother and overwhelm me, but over the years, I sharpened my anger like a sword. It was defense against him. It made me determined. It made me strong. It helped me let him go. I learned to tamp it down and pretend it wasn’t there.

Who would I be without my anger? I don’t know.

I don’t know how to tell her. I keep trying to bring it up but can’t voice the words. Maybe, I’m afraid she’ll convince me to let it go. Maybe, I know she’s right. Maybe, I don’t need it anymore. Maybe, I can move on.

Read the rest of my latest TinyLetter on anger and learning to let go here.

Or sign up to receive my TinyLetter, Cold Takes, via email each month here.

I refuse to be silent, but I’m not sure that most folks are really listening. END_OF_DOCUMENT_TOKEN_TO_BE_REPLACED

“I have to deactivate this page,” I tell my partner, “I can’t take this anymore.” END_OF_DOCUMENT_TOKEN_TO_BE_REPLACED

For the past two months, when my thumb tapped its way to a digital copy of American Beauty, it wavered, and then wandered away. I feared it. I feared the warm, twangy intro of “Box of Rain,” the memory of my father singing it guilelessly out of tune, of realizing it is Father’s Day today and how I don’t want to call him but reluctantly will, of knowing that this album is going to hurt. It hurts before I even start listening.

But let’s move back. It is 2003. My father and I are driving over 2000 miles from our Illinois suburb to San Diego. I have been accepted to a private liberal arts university that served Orange County’s academically undistinguished nouveau riche. In our cramped Honda Civic, my father has brought along  about 100 painstakingly “burned” CDs in individual jewel cases, each with an ink jet printed label in the same nondescript Times New Roman font. There was Joni Mitchell’s Blue in there, and Pink Floyd’s Wish You Were Here. But the one we listened to nonstop, through the blank spaces of the I-80 corridor, was American Beauty by the Grateful Dead. END_OF_DOCUMENT_TOKEN_TO_BE_REPLACED

“She never felt like she belonged anywhere, except for when she was lying on her bed, pretending to be somewhere else.”–Eleanor & Park

I picked up Rainbow Rowell’s Eleanor & Park this weekend because I wanted to read a book that wasn’t about the craft of writing, zombies, hippos going beserk, higher ed, or American religions. Someone somewhere mentioned that I should check out Rowell’s novels, so I downloaded Eleanor & Park to my Kindle.

The novel, set in 1986, traces the friendship and later romance of two 16-year olds. Eleanor is the new girl with bright red curly hair and full figure. Her family is poor, white, and dysfunctional. Her stepfather abuses her mother physically and emotionally. Park comes from a loving family. His mother is Korean and his father was in the armed services, but they don’t entirely understand their oldest son. Park loves comic books and music. He meets Eleanor on the bus. Mutual antagonism turns into kindness; kindness morphs into first love.

Never has any other novel I’ve read evoked what it is like to a teenager in such a humane and profound way. Rowell renders the melodrama of our teenage years not as caricature, but as intense, inescapable reality. Everything appears pressing because everything is pressing and significant and life-ending. Bullying is a fact of life as are shallow judgments about worth based on appearance, class, and race. Teenagers come into their humanity fighting against burdens of culture that adults have already accepted as normal and expected. They rail against life being unfair; we’ve already noted that it is and moved on. They think love can conquer all. We wonder if love has the longevity and stamina to conquer the mundane wear-down of life. They think they’re the only ones with these particular problems in these particular times. We recognize the familiar struggle of youth and the pained attempts to figure out what where we belong.

Eleanor & Park transported me back to my teenager years viscerally. The novel dredged up a host of things that I keep trying to forget. END_OF_DOCUMENT_TOKEN_TO_BE_REPLACED