Gord Downey, the lead singer from The Tragically Hip, recently announced that he has terminal brain cancer. I’ve been thinking about what The Tragically Hip meant to me.  While writing about how Barenaked Ladies (BNL) album Gordon changed my life, I could have written about Day for Night by The Tragically Hip. I figured this band was too obscure for a primarily American audience, so I went with BNL. But, to me, those two albums and bands are woven together in my head around a highly personal, but also a cultural, moment in time, along with Ashley MacIsaac, Our Lady Peace, Crash Test Dummies, Sarah McLachlan and even Alanis Morisette’s Jagged Little Pill. It was a moment when MacIsaac played Letterman, the Hip played SNL, “Superman is Dead” was all over the radio, Lilith Fair was all the rage, and Jagged Little Pill was everything.

It’s a moment I keep experiencing and re-experiencing as I write this piece on Gordon by Barenaked Ladies. Because none of this would have happened for me if I hadn’t been introduced to BNL in the fall of 1992.

Gordon was released in the late summer of 1992. I was a pool rat spending every waking moment at the pool and with my swimming friends. I had a boyfriend who was a lifeguard, older and cooler than I was. It hit a few weeks before my 15th birthday. I was preparing to go into tenth grade.

Gordon was released only two short years after Step by Step by New Kids On The Block (NKOTB) was released. I was a HUGE NKOTB fan and radio-ready pop music more generally. I didn’t own many cassettes from bands and artists I liked; I listened to whatever weekly Top-40 was on and taped my favorites. Few albums impacted me; I loved Madonna’s “Like a Prayer” and Janet Jackson’s “Rhythm Nation,” but going back and listening to them brings only vague recollections.

As I got a little older, the pop sheen of NKOTB wore off, and the pop radio station in our city shut down. All we were left with was classic rock. Pop music had largely lost its appeal. I started to feel the vacuous of it all and started looking for music that meant something.

I was, to put it mildly, a awkward, goofy teen without a soundtrack. Grunge didn’t resonate with me, with the bad boys with long hair, angry girls with ripped stockings, dark imagery, all the moody brooding. That wasn’t me. That wasn’t my friends. We felt separated from the cultural moment, as well as separated from each other, unable to articulate what made us who we were.

When I got back to school in the fall, there was a tape making the rounds that someone had copied from a friend from a friend: Gordon by Barenaked Ladies. The cover of the album has been rebranded to the iconic three-colored ball, but the original cover looked like this: 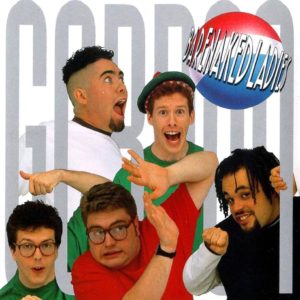 BNL were guys that I could see myself hanging out with. They looked like my friends: goofy, giddy, and suburban. They were perfect. The video for “Enid” in heavy rotation on MuchMusic was all of those things and more. It was acoustic guitars, harmonies, and mock turtlenecks. Here was a band not taking themselves too seriously. They were exactly what I was looking for, what a lot of us were looking for. The album spread like wildfire among a certain group of us, largely swimmers. We weren’t goths or punks or metal heads or greasers or hip-hoppers. I don’t know what we were, but BNL perfectly encapsulated it.

We found our band. And through them, we found our collective identity. Suddenly, it was okay for us to be goofballs. And then, I heard “What a Good Boy”: be with me tonight, I know that it isn’t right, but be with me tonight. When I finally listened to the whole album at 15, this song was like a punch to the gut. Every single line was my life: And when you were born, they looked at you and said, what a good girl, what a smart girl, what a pretty girl. The good girl who longs to be longed for in the way described in the song.

It was also the unexpectedness of that song, and many of the other songs, that made this album so special, so meaningful, and so powerful for me. The album opens with three goofy songs, “Hello City,” “Enid,” and “Grade 9” (which I’m pretty sure we all related to because it more perfectly summed up our collective experience from the year before than anything else we had ever heard). You’re lulled into a false sense of what to expect from this band from suburban Toronto. I loved all three of them, because the tunefulness, the goofiness, the awkwardness they express.

Then, “Brian Wilson” hits, which more perfectly explains what Barenaked Ladies is about as a band. You don’t know it yet, when you first hear it, and you still don’t realize it until almost 25 years later when you start obsessively re-listening to the album to write about what, exactly, it meant to you at the time.

The song is imagining what it must have been like to be Brian Wilson, genius songwriter who was now (or at least was known to be) severely depressed. Certainly, it is a bit presumptuous of them to equate themselves to that level of genius, and there are layers of irony in their songs that sometimes gets obscured through the tone (as well as wondering if they were actually being ironic). There is also something to be said about them revealing how much they related to, and in fact admired and wanted to emulate(for better or for worse) their musical idol. He spoke to them in the same ways they were speaking to me.

(Also, a bitching upright bass solo to close out the song. At shows, the guys would “dance” to this solo like, well, like most of us dance.)

They follow it up with “Be My Yoko Ono,” another goofy song, and one (at the time, because of my massive Beatles fandom) that I particularly enjoyed. In hindsight…Well, I’ll get to that.

A song about blaming a woman for a destructive and dysfunctional relationship is followed by another sneaky ballad about…a destructive and dysfunctional relationship. In it (as well as the later B-Side gut-punchers, “The Flag” and “Blame it on Me”), I heard the echoes of my own family, home life, and the relationship my mom had first with my father, and then with my stepfather. They were, for a teenager, an encapsulation (as was “Enid”) of the confusing, contradictory, and hurtful worlds of young love and immature relationships. But more deeply, it spoke to the kind of complicated and destructive love I was witnessing in my life.

Of course, given my recent fandom, the songs “New Kid on the Block” and “Boxed Set” were cynical enough to appeal to 15-year-old me ready to laugh at my younger self, but presented, again, in a playful and accessible wrapper, where I could laugh at myself, rather than loath myself. Or maybe just loath myself a little less.

And then, there was “If I had $1,000,000.” It’s a song that has become forever and ever linked with BNL. I still love it. Because they would sing it at every concert, I will always associate it with singing along with 2,000, then 5,000, then 10,000, then 20,000, then back down to 4,000 fans, together, voices rising as they modulate keys at the very end. I saw them in every sized venue in Montreal between 1992 and 2001 when I left the province to do my PhD. And at every single show, we sang, loud and strong and all together.  Two summers ago, when I went alone, I got to meet the band and sing along with a few thousand strangers, all of us loving BNL.

I bought the CD, finally, after having worn out the copy on cassette that I had. Canadian music, up until recently, had been Céline Dion, Bryan Adams, and Rush. And then, it was Barenaked Ladies, which lead into a whole new world of music that spoke to me in a way nothing yet had in my life. There was a softer side to grunge that BNL lead me towards, an openness to other Canadian acts, like The Tragically Hip, Blue Rodeo, and many others. The next three years would be about concerts and music festivals and singing in a makeshift cover band, and BNL started it all for me.

Later in tenth grade (early 1993), the person who became one of my best friends joined my swim team. We would sit at swim meets and on long bus trips to and from those meets listening and relistening to the album. He played guitar, and we would spend hours in his basement singing the songs on this album, particularly “Good Boy,” but also the jokey call-and-answer of “If I Had $1,000,000.” A group of us went to see them in concert, our first by ourselves, without our parents. The Habs won the Stanley Cup, too, that year, which made it even more special, and I’m sure that we listened to it on the car ride to the Stanley Cup parade. Everyone was turning 16, we were about to be Seniors (don’t ask, it was Quebec), and Gordon let us know it was ok to be who we were.

Listening to it now, I still know every note, every lyric, every moment of the album, with the flood of all of the emotions and memories. This album and a handful of other ones from this era I have carried with me, through college, graduate school, marriage, and motherhood. I can’t listen to “Good Boy” anymore the same way because I look at my own two kids and can’t help but think that they are, indeed, good, strong, smart kids. And the misogyny of a song like “Be My Yoko Ono” is particularly tough to take now. All of the abusive relationships recounted in the supposed ballads were lived and relived by me, and young, ignorant love can curdle so quickly into something ugly that we can’t escape. That I romanticized this abuse then, and that the album in a lot of ways still does, hurts in a different way than it did when I was 15.

But they did open me up to an entirely new world of music, a bridge. Not just the Canadian music that was hitting it big at that time, but also to bands like Weezer and Ben Folds Five, looking for and finding other nerd bands that could harmonize, that I could sing along to, that I could revel in the silliness and cry in the sadness and dysfunction that lived on the other side of it. I liked their other albums, but this one remains pivotal for me, one that I keep going back to.

If anyone ever wants to know who I was when I was 15, I was Gordon. And in a lot of ways, I still am.