Not So Graceful Period: My Alt-Ac Story 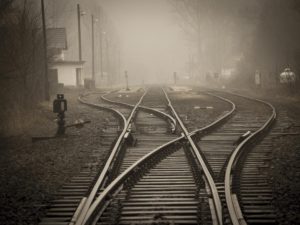 Often, I get asked to talk about how I have the career I have now as editor of Women in Higher Education. Folks often want an easy story of point A (Religious studies PhD) to point B (editor and writer). They expect it to be linear and simple to follow. One thing lead to another and suddenly I have a new career that pays a fairly decent wage. I just shifted from one career to another. Easy peasy, right? Um, no.

I tend to subvert those easy stories that folks like to tell about their transitions outside of the academy. Rather than telling a story that wipes out my failures and focuses on my successes, I talk about how I struggled. Struggle is the one word that I would use to describe my career transition. I struggled for years to figure out what kind of career I wanted to have, how to get to that career, and then find my way to a semi-permanent gig.

My career is a hodge podge of gigs that I have pulled together after years of effort and the luck of the draw. The gigs change each year. Some gigs disappear. Others I let go. Then, I find something to replace them. Sometimes, I don’t.

So, here’s my story about how I found my way to an alt-ac job and the struggle. (Some of this might be familiar to some of you. I’ve written about my journey before, but this time I am including an explicit focus on pay in dollar amounts.)

My partner was offered a job at a tech company as a telecommuter, so we could live anywhere. I quit my job because for two reasons. First, there was not guarantee that I would have a job at the end of the yearly contract. And second, my university refused to even consider giving me paid maternity leave because I was “just a lecturer” who supposedly didn’t have other duties besides teaching. That meant I would only make $12,000 that year if I took the fall semester off after my son was born.

We moved back to Florida in May 2013, and I took a year off to re-evaluate whether I wanted to go on the academic job market again or I wanted to try something else. It’s important to note that I could take a year off because my partner had a job with a good salary and benefits. I had the flexibility to try something new after I quit my job, which many people don’t have the option to do.

In 2013, my income included $12,000 for the spring semester that I taught, a couple hundred dollars in book royalties, and a few thousand dollars for winning an award for teaching excellence.

I agreed to write a column, Grace Period, for Chronicle Vitae, right after my second kid was born, for $200 a column. I agreed to one a month or $2400 a year.

That was the start of my freelance writing career, in which I wrote articles for Vitae and other publications for $150-$200 a month. Additionally, I started doing public lectures each year a few times a year for $500-$1000. Which, eventually, brought in a couple thousand dollars a year.

Now, if you are following the math, you’ll notice that in the first few years of the freelance writing and public speaking that I was NOWHERE near my original salary as a lecturer. In fact, I was a part-time freelancer in 2014, and I brought in almost $5200. In 2015, I doubled my earnings and made almost $11,400.

(Meanwhile, my partner took a new job at a startup at the end of 2014, which didn’t have benefits, which meant that we relied on ACA for our health insurance for our family of 4. Our insurance cost more than I made in a year as a freelance writer.)

Eventually, I negotiated $300 a column at Vitae for two series of columns, Grace Period and Sexism Ed. I thought it would be two each month or $7200 a year. That didn’t work out as I planned.

And those first two years as a freelancer required constant hustling (when I wasn’t wrangling a baby and then toddler): pitching to online magazines, trying out new columns at other venues, writing one-off pieces, writing lectures, travelling for lectures and conferences, and pretty much saying “yes” to any opportunity that came my way.

It was a serious amount of work for not a lot of money, but it was also building my writing portfolio and cultivating relationships with editors. Both of which led to new opportunities. Both of which was exhilarating and tiring.

Both years, I was also applying for jobs, full-time and part-time jobs. I received rejection after rejection for writing, editing and teaching gigs. This sucked.

One of the gigs I picked up was as a regular writer for Women in Higher Education. Thanks to the then-editor Liana Silva, who I met through Twitter. (Social media has had an incredible influence of my career, y’all, especially Twitter.) My starting pay was $150 an article, and I wrote one or maybe two articles a month, starting in late 2014.

By 2016, I picked up more speaking events for better pay ($1000-$1500). I still had book royalties coming in that ranged from a couple hundreds of dollars a year (to as much as a $1000). This is not a lot of money when you consider how much time and effort books take. I write books because I like to write books; it is not lucrative.

I always had more than one gig at a time. And there was always a chance that one of those gigs would disappear because a new editor took over or a publication changed direction or I couldn’t bring myself to write for an outlet any longer or I was tired of covering a particular beat. And when any of those happened, it was goodbye, income stream, I will miss you.

My career (of a variety of gigs) is Jen Polk calls a “portfolio career.” Now, my portfolio as includes developmental editing of academic monographs, nonfiction, and memoir and writing books for an independent press that gives me a better share of the royalties. Blue Crow Books is really the best.

After THREE YEARS of being a freelancer, in 2016, I applied for the job I have now: as editor of Women in Higher Education. Many, many people applied for this job (think the amount that apply for assistant professor jobs). There was only one editor position, and I was lucky that I got the job.

It took me THREE YEARS to find a gig that paid more than my lecturer salary when I left academia. It is also work that I find meaningful and necessary. That job is my main gig, but I still have side gigs. I will continue to have side gigs.

Three years is actually ahead of the curve for most folks getting into alt-ac careers. It can take longer to find a job and recoup your salary, much longer.

So, my supposed success was not over night or sudden. It took a hell of a lot of time and effort to get to the job I have now. My path was never guaranteed and required luck and good timing. And I still have side gigs, likely always will.

All of this is to say, I am glad that departments have finally decided to reckon with the fact that their students might not find a place in academia, but they also have to realize that alt-ac careers take more work, time and happenstance than they currently suggest. For instance, my path can’t be easily replicated because there is only one editor of WIHE, and I love my job and won’t be leaving it (ever).

Pushing students to alt-ac careers, without preparation, is not a solution.

Working to prepare students for the realities of a job market outside the academy will take time, reflection, conversation, and reflection. But, advisors, departments, and universities should be committed to doing the work.

It’s their ethical obligation to their students. They should take it seriously.

Beyond the Professoriate, Jen Polk and Maren Wood, and ImaginePhD are doing great work to train students and those within academia to prepare for jobs outside the academy. They offer advice, real talk, and preparation.

Katie Rose Guest Pryal’s The Freelance Academic (Raven Books, June 2019) is coming out soon. It’s the gentlest intervention that those switching careers need along with practical suggestions of what to do.

Jacqui Shine’s “Alt-Ac Isn’t Always the Answer” at Chronicle Vitae remains one of the best take-downs of the strange celebration of alt-ac careers that pay no attention to the reality of jobs outside of academia. Shine writes, “Encouraging people to think creatively about their career paths is, of course, just fine. And humanities PhD’s can and do find jobs outside of the academy all the time. But we shouldn’t start pretending that that’s what we’ve been training them for all along.”

There’s a volume that I co-edited with Joe Fruscione, Succeeding Outside the Academy: Career Paths beyond the Humanities, Social Sciences, and STEM. The contributors tell their personal stories of transition, offer advice, and show their failures and what they learned from them. Success might be in the title, but the contributors show that it is never quite as easy as it amight appear. Here’s the book launch event, so you can get a sense of what we were trying to accomplish with this collection

And then, there’s Grace Period: A Memoir in Pieces, my attempt to come to terms with what leaving the academy did to me, how it made me feel, and how I had to figure out not only what might career might be but what kind of person I was if I was no longer an academic.

1 thought on “Not So Graceful Period: My Alt-Ac Story”