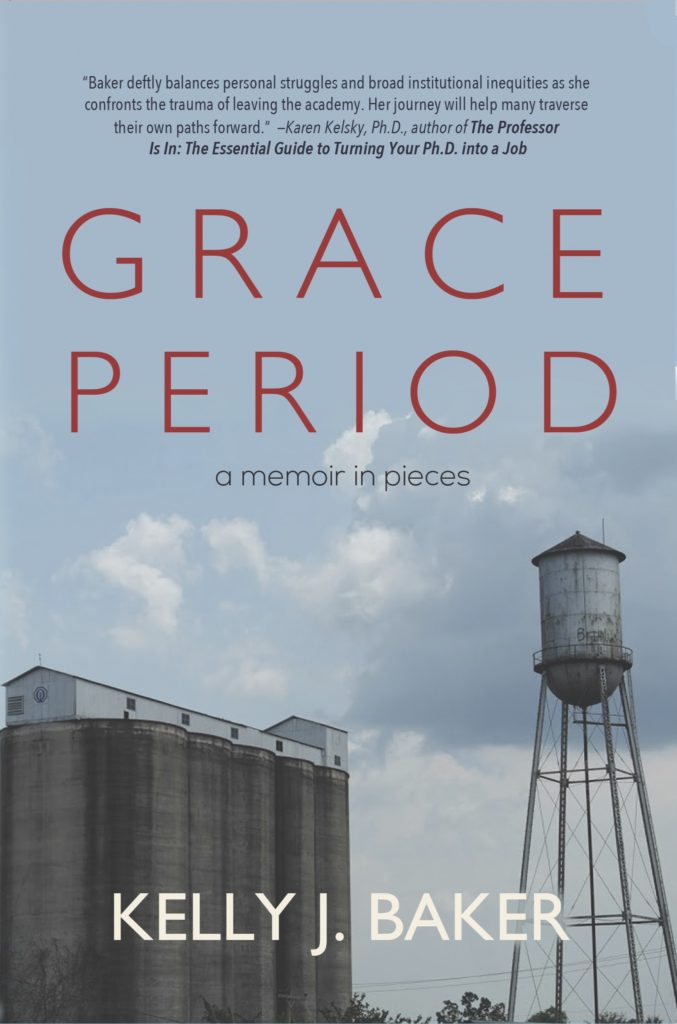 How do you build a life after failed dreams and missed opportunities? Kelly J. Baker finished her PhD in religion and imagined that she would end up in the tenure-track job for which she trained. She had done everything right: written a provocative and well-researched book, given presentations at national conferences, published articles, and created and taught a number of popular classes. Doing everything right, however, doesn’t guarantee anything if the career you trained for is no longer sustainable. The economic depression in 2008 gutted the job market for tenure-track jobs in the humanities, so she couldn’t find her dream job and worked instead as an adjunct and later a full-time lecturer.

But after five years of job rejections and a new baby on the way, she decided to take a year off to figure out if the career she trained for was actually the life she wanted. Grace Period: A Memoir in Pieces are the essays that she wrote to make sense of how her life went off-track. Expanding on her popular Chronicle Vitae column of the same name, she documents her transition out of academia and the emotional turmoil of rebuilding a life beyond what she had prepared for.

Instead of telling an easy story about her exit from the academy into a brand-new post-academic career, Baker resists smoothing over the hard reality of transitions, the importance of waiting and anticipation, and the realization that the lives we imagine for ourselves are tenuous at best and often are impossible to achieve.

Baker writes that ‘Optimism is a hard habit to kick,’ but in Grace Period, she shows readers how to move on from work that’s done them wrong with thoughtfulness, and yes, with grace. A dynamic, meditative book for anyone who has changed careers or contemplated doing so.

Baker is one of my favorite writers thinking about higher education today, and it turns out she’s a gifted personal essayist as well. In Grace Period, Baker combines higher ed commentary and personal storytelling in this beautiful reflection on what happens when the future you planned for doesn’t happen and you have to build something new in its place.

In a series of vivid and beautiful essays, Baker uses her changing relationship to academia to reflect on “grace periods,” those moments (or strings of moments) when you leave one possible future behind without quite knowing what’s next. Grace Period’s form serves it especially well: Baker has been writing about her transition since 2013, and Grace Period collects those essays and reflections together into a whole both fragmentary and so, so whole. Each essay is dated and presented in chronological order, so you watch Baker grow—as a person, a thinker, a writer—without the book erasing her “missed turns” (in her phrase) in retrospect. That’s how we all live our lives, unsure of what’s to come, and I’m thrilled to see that experience explored so sensitively and so beautifully in Grace Period.

Grace Period tracks the trials and triumphs of Baker’s post-academic transition from 2013 to 2017 with great insight and humor. Baker deftly balances personal struggles and broad institutional inequities as she confronts the trauma of leaving the academy. Recounting the many miseries of applying, adjuncting, interviews, rejection, writing, book contracts, disappearing jobs, and a certain disciplinary task force on contingency, Baker makes her way to the personal turning point, smack in the middle of the book: “I’m no longer transitioning away from academic work and life. I’m moving forward, one small step at a time.” Her journey will help many traverse their own paths forward.

—Karen Kelsky, PhD, author of The Professor Is In: The Essential Guide to Turning Your Ph.D. Into a Job

Grace Period is Baker’s clear-eyed, sobering, and honest examination of being a millennial religious studies scholar in an academy that has no use for so many of us, where one can’t ‘help but think about how academia claimed my life.

As much as Grace Period is a memoir about Kelly Baker’s transition out of academia, it is a book about dreams: what they give us, what they take from us, how they break us, and how they re-make us.