Track 5: The Only Time Sufjan Stevens Pissed Me Off

I have a 12-year-old bunny named Persey, short for Persephone, queen of the underworld and harbinger of Springtime. I have been listening to a musician for 12 years named Sufjan, which means “comes with a sword.” Persey and Sufjan have a lot in common: they’re both rabbits (Persey, literally; Sufjan, Chinese zodiac-ly); they both have black hair and long eyelashes; they’ve both spent quite a bit of time in Oregon; they’ve both been on NPR; they’re the two people who I would save during an apocalyptic event. I love them both very much, I would even go as far to say I cherish their existences. Persey and Sufjan make me happy.

As for me, let’s do some free association. What do people say about me, Amanda, “worthy of love”? A lot of people say I’m funny. About the same number of people eventually ask me if I’m depressed or bipolar. Yes, I am funny and bipolar, the winning combination that leads to morbidness, strange looks, long nights that turn into long days, many essays and/or tears, and eventually suicide. (I laughed as I typed that … in trying to be funny, I just said something true.)

It is August 2015 and last September in 2014, I attempted suicide for the fifth or sixth time since I was 17. I overdosed on Valium and probably some other things; I don’t remember anything except taking it and fading out. At some point, I apparently called my parents to say goodbye, and they called 911. Months and months later, my next-door neighbor would finally ask me what happened that night and tell me that she heard my mom outside the gate on the sidewalk yelling, “That’s my daughter!” I was in a coma, on a ventilator, in the ICU for five days. I almost succeeded. When I finally woke up, I was disappointed. I had been severely depressed for over a year and a half by then, this had been my last hope. I wrote a suicide note and would have never guessed I would call my parents. Love and facing death make you do weird things.

In January 2015, Sufjan Stevens announced a tour for his new album, Carrie & Lowell, his combination of a suicide note and a phone call to his mother, who passed away a couple years ago. I bought tickets for the show here in Portland in June, knowing I wouldn’t be going because I’d be dead by then. I had no intentions of being alive much longer. I knew I wouldn’t see my 31st birthday in May, much less Sufjan in June. My parents had all my medication under lock and key, dispensing it to me every morning and every night, and for most of the time since my suicide attempt, I had been staying with them. I had stopped bathing and eating and they forced me to do both of those things. They hid all the knives, scissors, razors, and even the fingernail clippers, which would have been embarrassing if I had had the ability to care.

I stayed in bed with earplugs in, not being able to stand even the sound of the air conditioner coming on and off in the other room. I had stopped listening to music a long time ago by then. My heart was beating, I was breathing, I could move, but I was dead. My spirit had died. I couldn’t even cry. The only thing I would think about was Persey, my elderly little rabbit who would probably be put down if I were to die. I couldn’t bear that thought, so I stayed alive for her sake.

I don’t know how it happened, but I made it to June 8th, 2015. I had new scars on my arms, but I had moved back to my apartment. I had listened to Sufjan’s album only three times over those five months because it was too much to listen to someone else’s pain, but I at least wanted to vaguely know the songs. The first time I listened to it, I sobbed in the shower, crouched down naked with my own black hair blocking my eyes from seeing anything around me. I didn’t listen to it again until the day before the concert.

The day of the show, I got dressed and walked to my favorite diner for a sandwich. I tried to force myself to be happy, I was getting to see Sufjan for the first time in three or four years! Come on, Amanda! Chin up! I ate my sandwich and drank my coffee and tried not to cry in public because I couldn’t even be happy about that. I told everyone I was happy and I smiled and everyone teased me about when the wedding would be, but I didn’t really care.

After I ate, I walked to my parents’ apartment and waited for my dad to get home from work. We all piled in the car and went to the venue. I was let in early for some reason, so out of my concert-going habit, I checked out the merchandise table and bought a t-shirt. While I was looking down at it in my hands, I saw that Sufjan’s album Enjoy Your Rabbit was finally released on vinyl. I felt excitement for the first time in months. I love that album; in fact, my screenname has been “enjoyyourbunny” for a decade now, which is perfect for someone known as “that chick who loves rabbits and Sufjan Stevens,” right? Clutching it to my chest, I found my seat, and I waited.

I did not have a good time at that show. I almost got up and left.

During one of the songs, I had an anxiety attack. It was physically painful to hear stuff like “we’re all gonna die” and “do I care if I survive this?” coming from Sufjan, someone I not only love, but who has provided so much comfort to me over the years through his music. Part of me appreciated the artistry and the arrangements of the songs, but most of my time was spent shifting uncomfortably in my seat, feeling numb, or like a shaken can of soda about to burst, or both.

The breaking point came when Sufjan stopped to talk about what he’s learned from his mother’s death and the grieving process. He said, “Despair is a choice. You can be sad or depressed, but don’t despair.” I felt myself turn red. If I had been standing next to him, I would have slapped him across the face for daring to say how I felt was a choice. I felt betrayed by the one person, other than Persey, who always said the right thing at the right moment, right when I needed it. He went on to talk about replacing despair with joy. All I could think was that I’m not even enjoying this concert — what the fuck is there left to find joy in if I can’t even enjoy a Sufjan show?

After the concert, my parents dropped me off at my apartment. I hadn’t cried or even emoted all night until I popped open the door to get out. I started sobbing. I asked my dad how Sufjan could say despair is a choice after all he went through? How am I supposed to choose to not despair when every moment of the past nearly two years was hell and wanting to die? Why would he say that when despair was close to the only emotion I felt? I took it personally. I was offended, like if a close friend had told me I had nothing to be depressed about. I sat in the car and cried. My dad asked if I wanted to stay with them. I told him no, came in, threw my purse and Enjoy Your Rabbit on my sofa, and cried myself to sleep, furious at Sufjan for the first time ever. Appropriately, I dreamed about rabbits, flashing lights, people with angel wings, and killing myself.

The next morning, I woke up crying. I cried all day. I raged inside. I tried to understand what he meant by despair is a choice. I have been listening to this man for over a decade, and he doesn’t just arbitrarily use words. Words have meaning. I happened to have an appointment with my therapist that morning, and I told him everything on my mind and how angry I was. He agreed with Sufjan, and I asked him to explain. He said despair is like suffering: pain is an unavoidable part of life, but you don’t have to make it worse by wallowing in it and suffering, just like you can be sad without giving in to hopelessness and despair. We talked about replacing my despair with joy. I said I had no joy. My therapist disagreed, he listed some of the things I like. None of those things seemed heavy enough to displace any despair at all.

I came home and cried more. I couldn’t make it stop; it was like my eyes were eaves and my thoughts were a hurricane. I pulled my hair back out of my face at some point and tried to get enough tears out of my eyes to be able to see to walk to the kitchen for a drink. I walked past my couch and glanced down. Enjoy Your Rabbit was laying there, the back facing up, with the tracklist in white lettering except ENJOY YOUR RABBIT in bright red, like a command. I read it and looked up. Persey was in front of me. I said out loud, “Ok.” 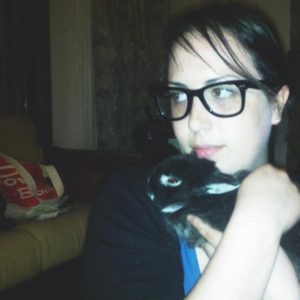 I picked Persey up, and she gave me kisses. I don’t think I had held her in months. Her black fur matted up as I cried on her, but she never stopped kissing me until I put her down. I felt a tingle of joy, not despair. I forced myself to enjoy my rabbit everyday. I petted her, she kissed me. When I saw my therapist the next week, he said I was different. I told him I had been enjoying my bunny. Soon, I started enjoying other things too. Soon, the despair melted away. Soon, I could even listen to music again. Soon, I will be seeing Sufjan again. This time, I will have a heart full of joy instead of despair. And maybe if I’m lucky, he will say something that pisses me off and changes my entire life for the better again.

December 1st, 2015: Persey passed away early this morning. We had 10 years and one week together. I met Sufjan Stevens on November 13th, 2015 and sent him this essay. Thank you for hanging in there until I got a chance meet my other rabbit and tell him about you, Persey. You are a smile without demand.

S. Amanda Clevinger was born and raised in Newport News, VA. Many iffy decisions and weird coincidences later, she ended up in Portland, OR in 2013. As a Southerner in the Pacific Northwest who has been fighting a lifelong battle against mental and chronic illness with a fire in her gut and smoke in her eyes, Amanda is known for her funny accent, her uncanny ability to find the break in the clouds, her demand to always stop to smell the roses, and her poignant wit, which has been compared to greats such as Twain, Wilde, and a 4-year-old. Though mainly writing for catharsis, Amanda hopes her words can connect with those living with mental illness, and illuminate that reality for those without it. She intends to conquer the world with her the ability to laugh at the absurdity of life.