The End Was Not the End 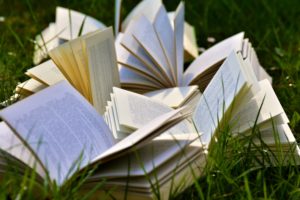 I’ve been thinking about that choice to leave academia, which was actually a million small choices that lead to the inevitable one, a bit more lately. About how radical, and not radical, the decision was. About how it lead me on a winding path to where I am now as a writer but also as a human being, who is still mostly a mess while trying to do better and be better. About how I almost gave up on things that I loved like research and writing, history and story, teaching and arguing about how the world works. About how I thought the end was near, that my life as over, when it wasn’t even close.

That assumption that I was at an ending is one that continues to fascinate me now. The end was really a beginning. I just need some distance from the story to realize it. Years of distance to see how to narrate what happened and what I learned. Sometimes, we are too close to the event to know what’s happening. Sometimes, a beginning feels like an ending at first. It’s a moment to stop and take a breath.

It feels fitting to contemplate that end that wasn’t really an end because I just signed a contract for a book manuscript on apocalypses and endings. This is a manuscript that I have been working on (and ignoring) since 2015. I pick up this project only to put it back down. I started it as a way to think about apocalypses, a scholarly topic that has me under its thrall, in way that I hadn’t before: as essays instead of as scholarship. But I also wanted to pair doomsday with something more mundane, those average every day endings that we don’t notice or that we do because they forever change us. Large endings with small ones. Cosmic concerns alongside domestic ones. Dramatic, earth-shattering moments with intimate, quiet ones. This is a book that I have longed to write, and the contract gives me the permission to do so.

What I realized this morning, on an airplane on sixth trip since March, is that this book on endings is my seventh book project. That fact startled and unnerved me. I try not to count projects or bylines or editor’s columns. Things can seem to big or small with a number. I would rather not know, which helps me focus on the work not the number. But, how in all of creation did I get to seven? (Or how the hell did this happen?)

The number seemed particularly disconcerting because I have thought again and again that I am done with books. Or maybe that I can’t write more books.

After I left academia, I thought I wouldn’t write anymore books. I had written two already and had a contract for another. I never finished the book under contract. I mailed a check back to my press with my advance, which I couldn’t ever convince myself to spend anyway. That moment, a particularly low one, made me think I was done with books or any big project really. I couldn’t hack them, so I wouldn’t try. I tucked that project away and convinced that I was done.

I couldn’t write books, remember? I was done, right? Three books suggested otherwise, but I still seemed unconvinced. My partner was convinced. My press, Raven Books, was convinced. And they convinced me to make those essays into a book and to revise and write more essays to make into something readable and useful and necessary. And yet, Sexism Ed became book four, despite my doubt and fear and unease and panic.

Book five is an edited volume about alternative academic careers, which will be out this fall. Still, I wondered if maybe this book would be my last book. Maybe I was really done. Books are hard. Books take time. Books are daunting.

But, I still seemed to outmaneuver my doubt. I decided to reimagine the book that I shelved and create a new book proposal for a different press. It’s a book that I actually wanted to write not an artifact of my previous academic life. That will be book six, a book on zombie apocalypses and what they tell us about America. It is due to my press next year.

Again, I wonder how I went from feeling like an irredeemable failure, or at least a failed academic, to the doubtful author of more than a few books and editor of an explicitly feminist magazine. How did I write books while imagining that I’m not able to do it? Can I get over that doubt?

I’m trying to learn to live with my doubt. It’s a terrible part of my process, but it motivates me. When doubt appears so strongly, I’ve learned to stop and pay attention and realize that I’m on my way to a breakthrough. Sometimes, I wonder what I would be without my doubt and nerves, and I can’t quite imagine what the results would be. Would I even write books at all without something to prove to myself over and over?

What’s so clear to me now is that the end I just knew was coming wasn’t actually the end of my story. The end was not an end. And I didn’t have to give up all those things that I thought were bound only an academic version of me. Those things defined me, with or without an academic post. So, I had to convince myself. And maybe I finally have. Maybe I can see now the importance of that transition. Maybe I can appreciate the pause and the confusion right before a new beginning. Maybe I can finally realize that endings are never quite as clear as they first seem.

*This essay first appeared as a TinyLetter on May 30, 2018. To read more essays like this, sign up at here.*